Kazakhstan suspends all financial operations and use of cash skyrockets

In Kazakhstan, all the operations of banks and financial institutions were suspended, including the stock market, due to the situation of political instability that shocked the country and caused the resignation of the prime minister.

According to the Interfax news agency, the Financial Market Regulation and Development Agency together with the National Bank, made the decision to suspend all operations of the local financial system, as a measure to combat political dissent and protect employees of bank offices and other entities.

It should be noted that the dissidents are classified as “terrorists” by representatives of the Government of Kazakhstan, because they have taken government buildings and police bunkers by force, obtaining weapons and equipment for combat. There have also been looting of shops and banks, according to local media.

While the conflict escalates, the Sputnik agency reported through its correspondent in Kazakhstan that citizens are withdrawing cash from ATMs, Due to the fact that the Internet cuts and the suspension of financial operations leave the population without electronic payment options. In commercial establishments only cash would be accepted.

Citizens line up to withdraw cash from a banking agency. Source: Sputnik Kazakhstan

The protests began due to the increase in the price of fuel in Kazakhstan and due to the Internet cuts, Bitcoin mining in the country was affected, causing the processing power or hash rate of the network to fall by 12% yesterday 5 of January, we reported in CriptoNoticias.

Kazakhstan is one of the countries that concentrates a significant part of Bitcoin’s processing power, at least 18% according to the University of Cambridge, after receiving a large influx of miners from China when this country banned this activity.

Currently, the hash rate or hash rate stands at 178 exahashes per second (EH / s), when before January 5 it was at 188 EH / s, according to the analysis firm Braiins.

The mining difficulty is at 24 T, one of the highest in the history of Bitcoin, but it is possible that it will also go back tomorrow, when the next adjustment is made that brings the balance between the difficulty and the power of the miners. 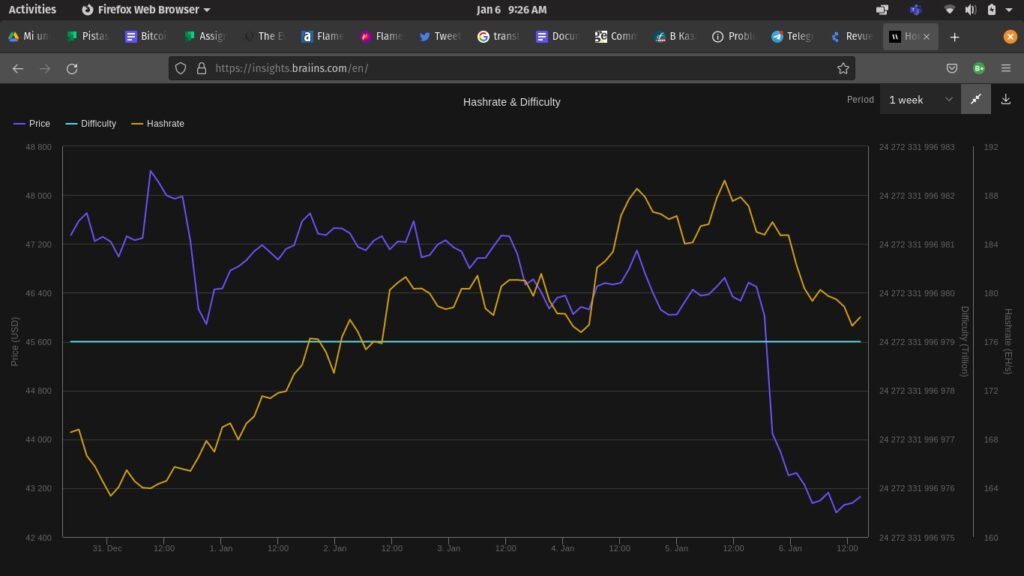 Is Bitcoin a Viable Option for Kazakhstan?

Although Bitcoin mining in Kazakhstan is a thriving industry, this does not imply that the adoption of bitcoin (BTC) as a payment method is considered by citizens.

Even if it was, Internet outages would make transmission of Bitcoin transactions difficultWhile there are still no infrastructure solutions to overcome government restrictions in this regard, except for the Blockstream satellite, which is not overcrowded and requires some expertise to implement it.

Given the political problems in Kazakhstan, Blockstream published a comment on this point, noting that having its satellite would serve as a backup for these cases, creating more redundancy and resilience in its connectivity.

CriptoNoticias also reported how the fall in the hash rate and the political situation in Kazakhstan could have caused the price of BTC to drop, losing support at USD 45,000 per unit, as can be verified in our price calculator.