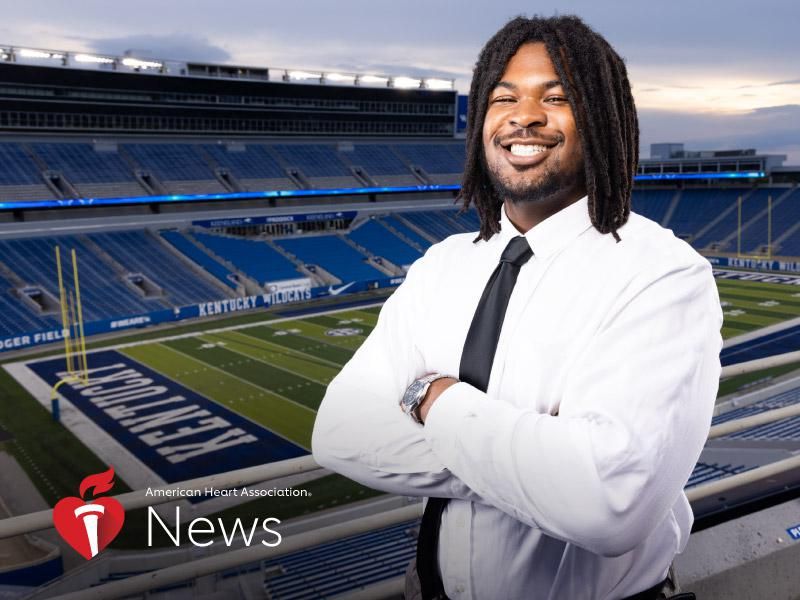 Kenneth Horsey was digging into a pile of baby back ribs with his family after church. It was Easter Sunday 2018 and Kenneth had much to look forward to in the coming months.

Soon, Kenneth would be headed to his senior prom and graduation from Seminole High School in Sanford, Florida. Then he'd move to Lexington, Kentucky, to attend the University of Kentucky on a full football scholarship.

At 6-foot-3 and 335 pounds, the offensive lineman could put away plenty of ribs. But during the meal, he felt a searing pain in his side.

Maybe he'd eaten too fast, he thought. He excused himself from the table and went to the bathroom. The pain became excruciating. He began to vomit and felt feverish. His vision blurred. The only thing he could think to do was climb into the bathtub.

He was able to yell to his parents, who came running. Kenneth was so hot to the touch that his father sprayed him with water from the shower. His mother called 911.

At the hospital, doctors ordered a battery of tests and scans.

The following day, Kenneth was diagnosed with endocarditis, an infection on a heart valve caused by bacteria. The bacteria produce what is known as vegetation. Pieces of vegetation can break off and travel in the body. In Kenneth's case, a piece went to his kidney; that's what caused the shooting pain.

One of the doctors to first treat Kenneth told his parents that he would likely never play football again.

"My heart just dropped," said Shari Horsey, Kenneth's mother. "How do you tell your 18-year-old that was just accepted to a college team that he's not going to be able to play football again?"

Soon after, however, a surgeon told them the opposite.

Because the heart muscle wasn't damaged, Kenneth could keep playing. But first, the surgeon said, he needed to perform open-heart surgery to remove the growth from the valve.

"I was in complete shock," Kenneth said. "But I also understood it was needed and I just had to rely on my faith to keep me strong."

Removing the growth required the surgeon to crack Kenneth's sternum. Once the heart repair was done, the sternum was repaired with titanium plates.

Within two weeks, Kenneth was back home and focused on cardiac rehabilitation.

For several weeks, the muscular teen couldn't lift anything over 5 pounds. He walked daily. He also did exercises with deep breaths to expand his lungs. Because of his renewed hopes of playing professional football, he knew he needed to push himself.

"I'd walk a few hundred feet and feel like I'd run 2 miles, breathing hard and dripping in sweat," he said.

Physical stamina was only part of Kenneth's challenge. Doctors warned his parents that a more difficult obstacle is getting an 18-year-old to accept all he's endured.

"We tried to keep as positive as possible, but also realistic," Shari said. "There were a couple times we had to talk him off the ledge of despair, but we knew he was going to be able to play again if he was patient."

In July 2018, Kenneth moved into his dorm at Kentucky. He continued his rehab there, assisted by coaches, trainers and doctors. In late July, he was able to start running with his teammates.

He sat out that fall. He played four games in 2019 but did not start. He started eight games in 2020, even though he'd broken his hand in training camp and needed surgery to repair it. He started every game this season, capped by a victory in the Citrus Bowl on New Year's Day.

He will graduate in December with a bachelor's degree in communications. He's applying for a master's degree in social work. He could continue playing while in graduate school.

For the past year, Kenneth has been putting his communications lessons to use by sharing his story about being a heart disease survivor. He was inspired to do so by one of his former teammates – Courtney Love, now the team's director of player development – who "stressed that we should be of service to the community that gives so much to us."

Kenneth has spoken at several American Heart Association Heart Walk events and coordinated and planned a hands-only CPR training for the UK football team and staff.

"In freshman year, I didn't want to be known for my heart surgery, I wanted to be known for my play on the field," he said. "Now I'm very comfortable talking about it because if I can help somebody going through a similar thing, then I've done some good."

Kenneth was recently named to the Southeastern Conference Community Service Team in recognition of his achievements on and off the field.

"We are especially proud of him taking care of himself and paying it forward," Shari said. "If his story can help other people, especially youth, that's a wonderful thing."