Estonia clarifies that it will regulate DeFi, but will not ban Bitcoin

The regulation known as VASP (for its acronym in English) has implications for DeFi.

According to the Minister of Finance, the objective of VASP is to strengthen anti-money laundering policies.

Estonia has had to clarify the new regulation that has questioned the freedom that citizens would have to freely own bitcoin within the country.

As highlighted by CriptoNoticias at the time, a new regulation published by the Estonian government could impose a fine of up to EUR 1,000 just for having bitcoin wallets that did not comply with AML-KYC policies. Or at least this is what stood out in the first instance on the enactment of this controversial law.

However, the Estonian Minister of Finance has come out to declare, according to the PYMNTS portal, that the regulations are not “prohibiting private ownership of cryptocurrencies” in reference to the fact that the regulations only apply to DeFi applications and exchanges, and not to self-custodial purses.

This means that the legislation does not contain any measures to prohibit clients from owning and trading virtual assets and in no way requires clients to share their private keys.

The legislation, as expressed by Pentus-Rosimannus himself, is attached to the recommendations of the FATF, which allows “to combat money laundering” through more strict policies. This will apply on exchange platforms and even bitcoin ATMs that operate within the country.

For their part, some users on Twitter posted their complaint that Estonia would be “banned” from DeFi as of March 2022, the date on which the law would come into effect. 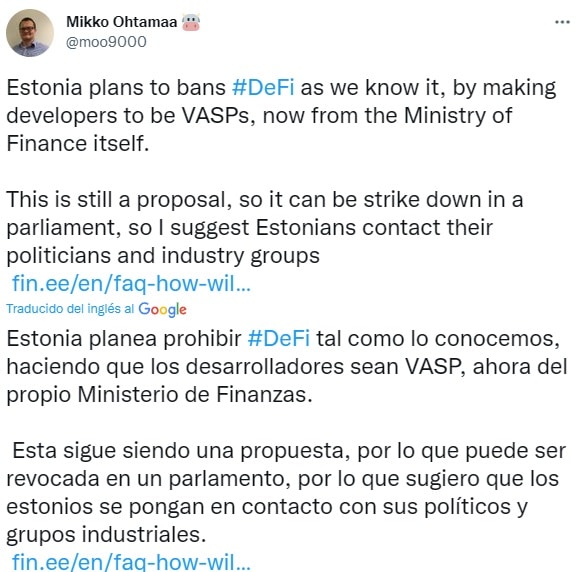 The complaint is based on the fact that basically the country would require personal documentation
both to exchange and to bitcoin and cryptocurrency developers.
Source: @ moo9000 / twitter.com

The regulation, although it will not prohibit the use of bitcoin and cryptocurrencies in the country, if will impose limitations that can reduce the use of crypto assets in this country.

Europe seems not to set a position at all against cryptocurrencies. Although they have not decided to create regulatory policies, they have created regulations that either affect their use, or compromise their privacy in favor of the development of anti-money laundering legislation.

One of the most affected has been Binance, who was in the eye of the hurricane of regulators who even took it to cease its operations with cryptocurrencies within some countries, as was the case in Italy, if this was not formally regulated within the country.

This regulatory scenario occurs just as Europe prepares for the launch of the euro’s CBDC, which has already been criticized for putting Europe’s financial stability at risk, according to the Bank of Spain.