The firm promises $ 0.05 worth of BTC per share, based on the price of the cryptocurrency at checkout.

Investors who do not wish to receive the so-called “bividend” can take it in cash.

The American company BTCS Inc. reported that it will be the first company listed on Nasdaq to pay its dividend in bitcoin (BTC), a few hours later its shares rose more than 40%. The board of directors stated that it will grant a dividend of USD 0.05 for each common share outstanding, payable to registered holders at the close of business on March 17, 2022.

Shareholders are offered the option of receiving the proceeds of their dividend in cash or in bitcoin. The company calls this last option “Bividendo” and will grant it based on the price that the cryptocurrency will have on March 16.

“This is a moment that we had anticipated since the company bought the domain, bividend.com, in February 2015,” said Charles Allen, CEO of BTCS, according to a statement.

The company, focused on the development of blockchain infrastructure, saw its shares rise about 40%, this Wednesday, January 5, taking its market capitalization around USD 43 million, as shown by Yahoo Finance. 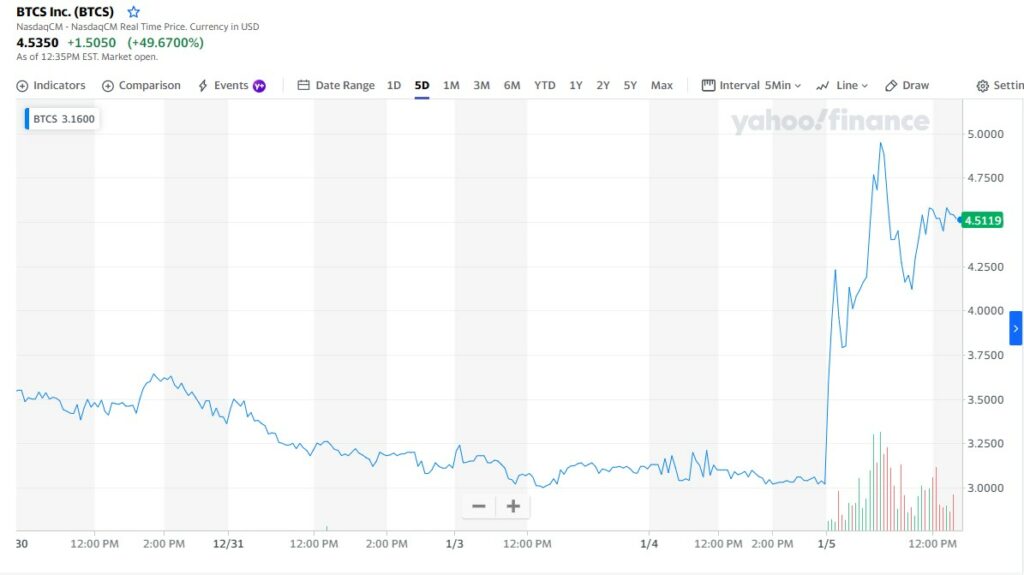 Shares of BTCS Inc. rose above 40% as soon as it became known that the company will deliver dividends in bitcoin. Source Yahoo Finance.

BTCS believes that by paying its dividends in bitcoin it is driving the adoption of the cryptocurrency, while opening a new chapter in its eight-year history.

Most important to the spirit of BTCS is the adoption of cryptocurrencies and financial freedom. Since 2014, BTCS has been committed to developing the infrastructure that supports blockchain technology. Continuing on this journey, BTCS is now opening the next chapter to fulfill our mission to further promote blockchain adoption.

As reported by CriptoNoticias last year, there has been a significant increase in cryptocurrency ecosystem companies on the world’s stock exchanges. In fact, between January and August of last year, nearly as many companies hit the stock market as in 2019 and 2020 combined.

Between exchanges, mining equipment manufacturers, mining companies, fintechs and hardware manufacturers for the bitcoin industry, a total of 57 companies are counted that are publicly traded. The best-known names include Marathon, Silvergate, Canaan, Ebang, and Northern Data.

The number continues to grow, even BTCS Inc. is among the new companies listed on the stock market, having entered Nasaq in September 2021.