Argentina has a new competitor in the tipping industry with bitcoin

Tipybit is taking its first steps and is based on the Lightning Network.

You can send micropayments without registering, just by scanning a QR code.

What may be a simple tip for one person, may be an incentive for a creator, developer, or artist to continue their productive efforts. Tipybit, a platform created by an Argentine entrepreneur, seeks to facilitate these interactions through bitcoin (BTC).

Operation on site is easy. In order to receive tips, the user has to enter with his name, email and describe what he does. You can also add a profile photo. With just one more step, verifying the email, you can now have a public profile to share.

When people enter this profile, they can select the dollar amount of the tip and, by scanning a QR code, make payment with any bitcoin wallet that supports the Lightning Network.

This simplicity when tipping is the main objective that Nicolás Andrade had in mind when creating Tipybit. “The idea is that anyone can easily receive donations through bitcoin. The main thing is that it is easy to use, both for the user who creates the account and for the people who want to donate “, the entrepreneur says to CriptoNoticias. 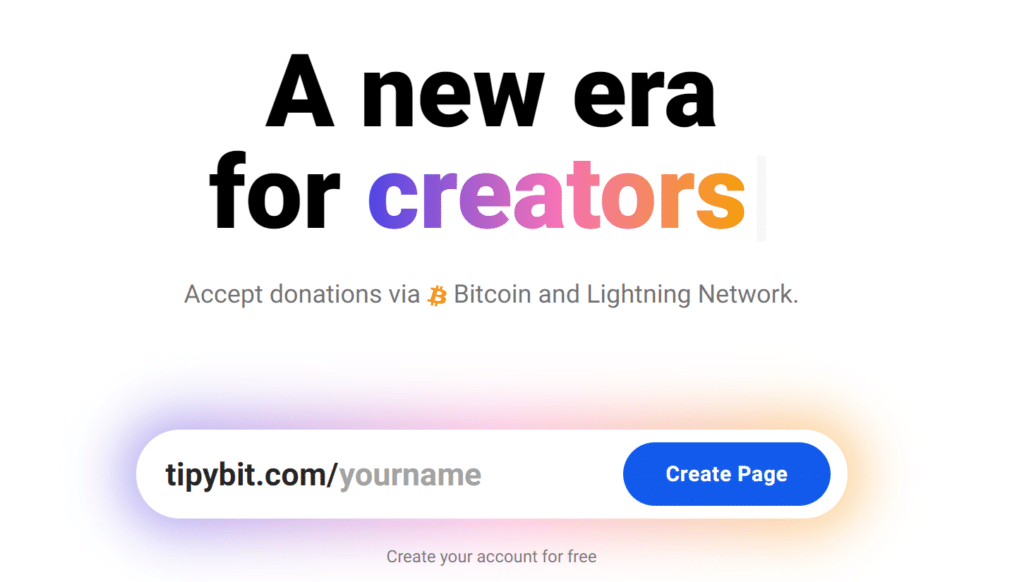 On Tipybit’s home page, its focus on content creators is made clear. Source: Tipybit.

“You can donate without configuring or installing anything, just by scanning a code,” he details. This is what differentiates his site from other “more restrictive” sites, which ask to install extensions, use credit cards or currencies that are not available in all countries, he adds.

Tipybit takes its first steps and grows thanks to bitcoin

To gain momentum, Tipybit – like any other startup – needs income. The platform’s business model is based on charging 4% of each donation. “There is no fixed amount for using Tipybit, it is only charged when the content creator receives a donation,” Andrade explains. Of that 4%, 1% goes to the node it uses to operate, which is the Opennode payment processor.

The page has not yet been released to the public massively because there are some details to be polished. For example, that the verification email is detected by Google as a potential threat. This will be corrected in the short term with some changes linked to the server that the site uses to function, details its developer.

“For now, we are in beta. The platform is open to the public and can be used, but in the meantime we are polishing small errors, “said Nicolás Andrade, who learned programming and design in a self-taught way and has been” an admirer “of bitcoin for several years.

How the Lightning Network facilitates micropayments with bitcoin

Lightning Network is a network that is based on payment channels between two or more people. Thus, LN allows you to send small amounts of money almost immediately and without commissions, since it does not occur through the main Bitcoin network, according to the CriptoNoticias Criptopedia.

The benefits of this method of operation with bitcoin are increasingly known and taken advantage of. As reported by CriptoNoticias, in September 2021 this network had registered a 200% growth in its use in the last 12 months.

Furthermore, this development has been aided by Taproot, the most recent Bitcoin update. As explained in other publications of this medium, the characteristics of this new update allow transactions through the Lightning Network to be more private and even that the different types of transactions cannot be differentiated from each other. All of this results in a safer and more efficient experience for users.