Millions of children woke up very excited this Thursday morning to discover the surprises and gifts that the wise men had left for them during the night. One of them was Alaïa, the daughter of Adamari López and Toni Costa, who since last night prepared with her parents for the magical arrival that she expects every January 6. A Latin tradition that, in addition to being one of the most beautiful of childhood, is one of the many that Adamari wants to instill in her daughter so that she will always feel happy and proud of her roots.

On Wednesday night, Alaïa went out to her garden accompanied by mom and dad to cut some grass that they would leave with a little water as an offering for the animals where the kings came to meet the child God. According to the Gospel of Matthew, Melchior traveled by camel, Gaspar on horseback and Baltasar on elephant. And with the grass that Alaïa left, they would receive a gesture of affection similar to the one that little ones leave for Santa Claus in the form of milk and cookies.

“It is a very beautiful tradition that is made in our countries. We live in the United States and it is not celebrated here unless you are Latino or Hispanic ”, explained the Hoy Día presenter.“ The celebration of Christmas here ends with the New Year, but for us it has a lot of meaning and importance ”, added.

Adamari was very happy to continue with this tradition that she has had since she was little, and that her daughter adopted from her first year of life. “We love as a family to keep this tradition alive. Happy Three Kings Day! Tell me if you celebrate it too, kisses 😘 ”.

While they were cutting the grass, Adamari said that Santa Claus comes home to give Alaïa toys, and that the wise men usually bring her more useful things for her day to day such as clothes, books or educational things. For this year, the girl asked for two volumes of her favorite educational books. 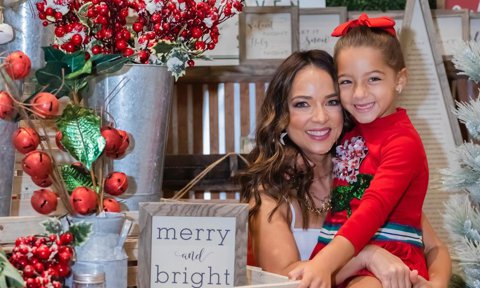 “The kings bring him books, most of them in Spanish, so that he can continue to speak their main language, which is Spanish, and which is the one spoken by his mother and father,” Adamari noted. In the end Alaïa managed to collect a good amount of grass to place it in a cute box and leave it at the door of her house, where the animals will eat to continue on their way of delivering toys to the children.

Subscribe to our newsletter. Be the first to know the news about your favorite celebrities and royalty and discover the latest trends in fashion and beauty.